Last 4th May, Pacha reopened its doors to welcome the new Ibiza 2018 season after a winter of refurbishments. Every week this month will bring new club openings and parties. If you’re planning to travel to Ibiza in May and you’ve already booked a suite at Ibiza Sun Apartments, remember the following openings and join the start of the new 2018 season!

May is one of the busiest months in Ibiza thanks to the opening of all the clubs and important events like the International Music Summit (IMS). This event is well known in the electronic music industry and is held late May, so it’s the perfect excuse for a getaway to Ibiza when the island kicks off the new season. Don’t miss it!

We open our doors on April 12th!

Ibiza Sun Apartments has begun its countdown to the new 2018 season. After a few months of rest and getting things ready for the new season, our team will be all set to welcome you to Ibiza from next April 12th. We look forward to seeing you!

Book your room today to enjoy our two special offers

Next 12th April, Ibiza Sun Apartments will open its doors again to welcome the 2018 season. If you haven’t yet booked your holidays in Ibiza, don’t miss these two special offers that were specially made for those who book a room at hour hotel before 31st March. Don’t leave it too long, the summer is approaching fast (and it won’t wait for you or anyone else).

New flights to Ibiza for the summer 2018 season

News about summer 2018 are already coming in, like the new direct flights to Ibiza that will connect the island to Europe with more flights. If you live in Paris or Oslo you will be interested in what we’re about to tell you. Keep on reading.

New flights between Paris and Ibiza in summer 2018

Paris will be closer to Ibiza this summer with the new Air France flights that will start on 16th July until 2nd September 2018 and will leave from Paris-Charles de Gaulle airport. The frequency of this new flight will be three times a week on Wednesdays, Saturdays and Sundays. These flights add to the existing ones offered by Vueling and Transavia.

New flight between Oslo and Ibiza in summer 2018

Also, the Norwegian capital will be linked to Ibiza from 18th June until the end of August thanks to the new direct flight offered by Norwegian Airlines. These flights to/from Oslo will be twice a week, leaving from Oslo on Mondays and Fridays and from Ibiza on Tuesdays and Saturdays. Easyjet will be providing flights to Ibiza from Bordeaux this summer on Tuesdays, Fridays and Sundays, starting on 26th June; from Porto on Wednesdays and Saturdays from 27th June; and from Toulouse on Saturdays from 30th June.

Ibiza, one of the most desired destinations in Europe

Last year, the airport in Ibiza counted nearly 8 million passengers between departures and arrivals. This is the highest number in its history and proves that the island has become one of the most sought summer destinations in Europe among travellers from many nationalities: British, Italian, Swedish, German, French, North American, Australian, South Korean, Swiss... Its crystal-clear waters, Mediterranean landscape, its unique architecture, its excellent food and its clubbing scene have made it famous worldwide and it appeals to all kinds of visitors, from families to foodies.

Our Suites and Junior Suites are only two blocks away from Playa d’en Bossa beach, the longest beach in Ibiza, and only a six-minute drive from Ibiza’s airport. It is also very near the city centre of Ibiza: either a 5-minute drive or a 15-minute bus ride and the bus stop is practically at the hotel’s doorstep. 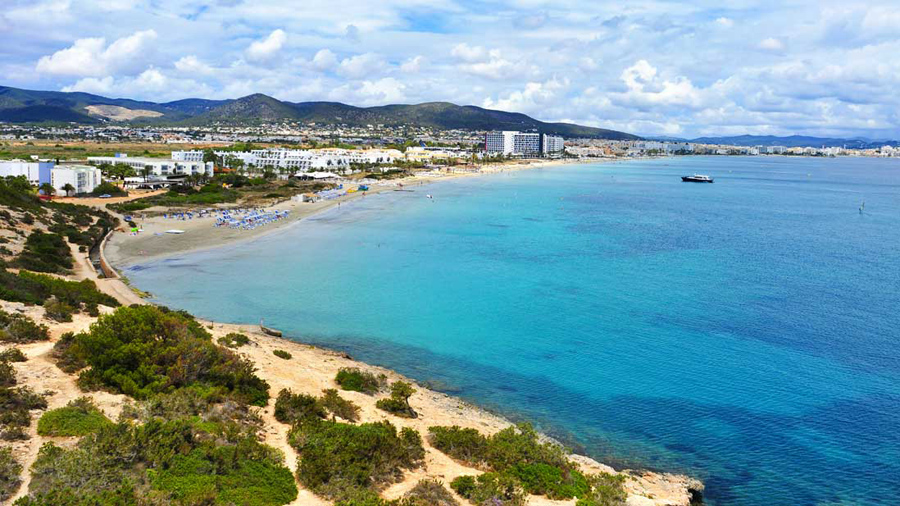 Is this your first time at Ibiza Sun Apartments?

Learn what our customers think about us on Tripadvisor, Booking and Google+.

10 Reasons to book a room in Ibiza Sun Apartments

Once you’ve landed in Ibiza, your holidays go smoothly and everything is simple, fun and memorable. Usually, the hardest part of your experience in Ibiza is before you get here, when you have to choose the accommodation. For this reason, in this post we will share 10 reasons why you should book a room in Ibiza Sun Apartments. Read below to find out all the benefits in booking a room with us and how do you enjoy a fabulous holiday in Ibiza. For the 2018 season, we will be open from 12th April until 31st October. We’re looking forward to seeing you!

Is this your first time in Ibiza?

Life is full of first times and we all know how fun or disappointing they can be; it all depends on what we know beforehand and how we tackle the mistakes we are bound to make. This is why we have decided to devote this post to the dos and don’ts for your first trip to Ibiza, for you to enjoy your holidays on the island to the fullest and avoid the usual mistakes that all (or practically all) newbies make.

5 successes you should have on your first trip to Ibiza

Are you preparing your next holidays to Ibiza?

Book a Junior Suite or Suite in Ibiza Sun Apartments, in the heart of Playa d’en Bossa beach and enjoy the best holidays this year.